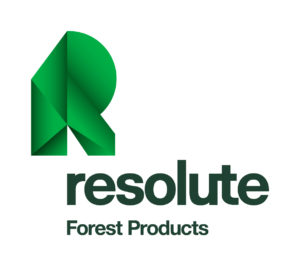 Resolute Forest Products is a global leader in the forest products industry offering a dynamic and safe work environment with opportunities and challenges that will help grow your skills. The company owns or operates some 40 facilities, as well as power generation assets, in the United States and Canada. Marketing its products in over 70 countries, Resolute has third-party certified 100% of its managed woodlands to internationally recognized sustainable forest management standards.

We’re a company writing a new story for itself in a rapidly changing industry. We’ve made important inroads to ensure long-term profitability and be an environmental supplier of choice. Resolute has received regional, North American and global recognition for its leadership in corporate social responsibility and sustainable development, as well as for its business practices. Come help us write our story; be part of the change.

Resolute Forest Products is a pulp, tissue, wood products and paper manufacturer headquartered in Montréal, Quebec, formed by the merger of Bowater and Abitibi-Consolidated, in January 2007.
Resolute has roots that go back nearly 200 years in Quebec, which took hold in the midst of the Industrial Revolution. Starting in 1820 and over the following two centuries, the company grew from 20 sawmills along the banks of the St. Lawrence River to some 40 pulp, tissue, wood products and paper facilities we operate today in Canada and the United States.

In 1820, William Price founded a lumber company in Quebec, which was taken over after his death by his sons (William and Evans) to become Price Brothers & Company Ltd. The company stayed in the family for generations of Price sons until 1930 when the company was sold. It became Abitibi-Price in 1974 and later was acquired by Abitibi-Consolidated.

Abitibi Pulp and Paper Co. was founded in 1912 at Iroquois Falls, Ontario on the Abitibi River by Frank Harris Anson. The name was changed to Abitibi Power and Paper Co. to reflect the power generation business it created after building a dam to generate electricity for the paper mill. The company expanded to other locations in Ontario where it also built dams and operated hydroelectric power stations. Wherever the company built a mill, a new town sprang up around it and it even built radio stations such as CFCH in Iroquois Falls to serve these remote new communities. The company acquired other small lumber operations and grew to become a major force in the North American newsprint business but the Great Depression forced the company to file for bankruptcy protection on September 10, 1932. Emerging from bankruptcy only in 1946, the company prospered in the post-World War II industrial boom and in 1965 changed its name to the Abitibi Paper Company Ltd. In 1974, Abitibi purchased a controlling interest in the Price Brothers & Company Limited which had extensive operations in the Quebec. The merger of Abitibi and the Price Brothers made it the world’s biggest newsprint producer.

On January 29, 2007, Bowater and Abitibi-Consolidated announced they would be merging to create AbitibiBowater, which become Resolute Forest Products in 2011.

2015
Resolute Forest Products enters the tissue market by acquiring Atlas Paper Holdings Inc., with operations in Florida, and begins construction of a new tissue facility at its Calhoun pulp and paper mill, in Tennessee.

Resolute Forest Products is a global leader in the forest products industry with a diverse range of products, including market pulp, tissue, wood products, newsprint and specialty papers.

The company owns or operates some 40 facilities, as well as power generation assets in Canada and the United States.

Marketing its products in over 70 countries, Resolute has third-party certified 100% of its managed woodlands to internationally recognized sustainable forest management standards.