As this is the first entry of five in the Green Dream Intern 2020 series, I would like to take the opportunity to say that I am thankful for the chance to share my summer with everyone. In my first post, I will be introducing myself and sharing my path to this point with you.

Born and raised in Goulais River, Ontario (30 km north of Sault Ste. Marie), I spent considerable amounts of time outdoors exploring old trails on my bike, making campfires and swimming with friends on the banks of the river that runs through our small community. Periodically, my father would take me along to the harvest operations where he worked as a contractor under a local logging company known as Meakin Forest Enterprises. As a contracted harvester, Dad operated a Serco brand Slasher to cut hardwood trees to log or pulp length to be trucked to various mills in our area. Growing up, I was not very interested in the profession that my father fed his family with. Long hours, weeks away at logging camps and, in his words, “being married to the machine”, did not particularly coincide with my hopes and dreams of being a musician, a photographer or whatever else I was interested in on any particular week.

Eventually, more out of necessity than interest and with no plans for the future after high-school graduation, I took my father up on a job offer to operate his second slasher full time in the beautiful maple and birch forests surrounding my hometown. As it turns out, I was not wrong. Long hours and hard work in old machines with little in the way of A/C in the hottest parts of summer, did not exactly fulfill the hopes and dreams previously mentioned.

Whether I realized it at the time, I learned a lot through those 3 or 4 years. I was taught about log quality grades, different merchantable species in the Great Lakes/St. Lawrence area, basic machine maintenance and the importance of stem utilization (you only mess up cutting a yellow Birch Veneer once, trust me). There were good times and there were bad times. I got to spend every day with my dad, something that I could not do as a kid when he was working long days away from home, and something I regrettably avoided doing as a teenager. I learned a lot about him as a man and heard various stories I promised I would never repeat about a younger time in his life. These are some moments that I will always cherish. But there were bad days, too. Like the three days wasted swapping a broken axle of a Mack truck in -30 temperatures before deciding to bring the entire rear differential housing to a certified mechanic, or another time when the oil plug fell out of my skidder in the middle of the road… Those types of moments build character, right? 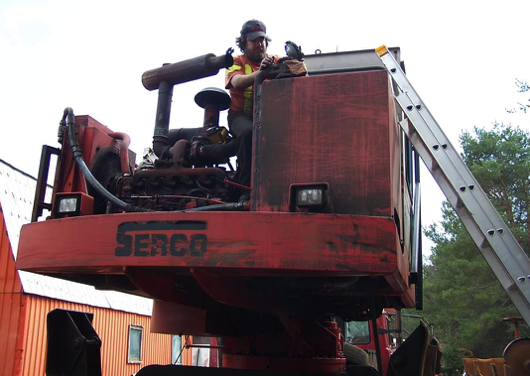 Eventually, I was faced with a decision to continue as an operator in the harvesting world, eventually leading to the investment into new equipment, or I could consider taking up courses at the local college. After some thought and convincing, I settled on the Forest Conservation Technician program offered by Sault College. The choice boiled down to, as a 21 or 22-year-old, was I willing to devote the next decade or two of my life trying to pay off a machine that cost an arm and a leg? It was not a difficult decision. 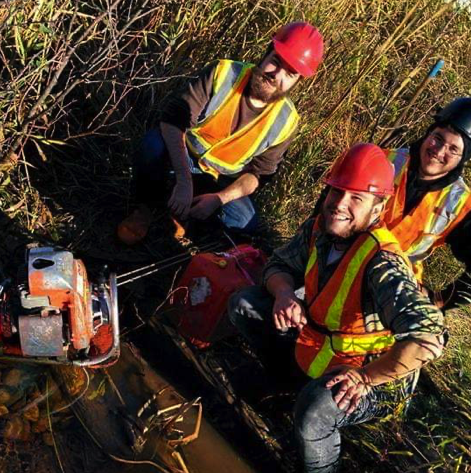 Do you ever have those moments where you sit back and ask yourself how different your life would be if you had not made that particular choice, at that particular time? This was that moment for me. When I started classes at Sault college, everything seemed to fall into place. I exceled in most of my classes, made the best friends I had ever had and stumbled upon wonderful opportunities. My summer college employment had me working as a Silviculture Assistant in the small towns of Chapleau and Timmins, both located in Northern Ontario, for Tembec. Though I missed home, friends and longed to be back in school, I gained a lot of knowledge in the world of silviculture, and it was my first taste of teamwork and dealing with the occasionally less than happy tree planters day to day. When the summer was over, I returned to school and eagerly graduated the Forest Tech program in 2016. 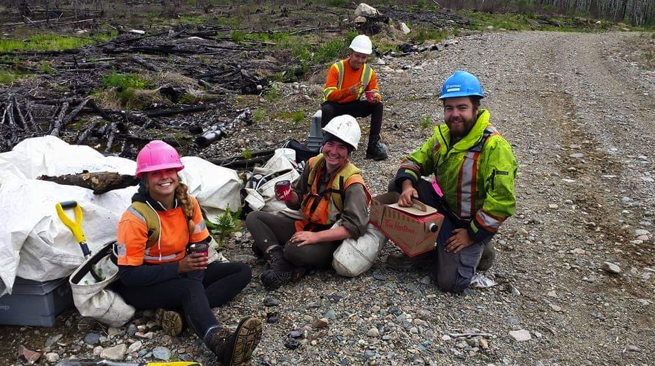 A phone call came one afternoon when I was studying for my final exams. It was a company called Compass Land Consultants (CLC), a land appraisal and forest management company. I have not interviewed for many jobs in my career, but this is one I’ll never forget. I stepped into the room and met two men named Nate and Jon. It was hard not to notice the beard hanging down to Nate’s belly as Jon quickly began to describe what their company values were and what the job itself entailed. CLC is based out of Michigan and was tackling a project in Canada that established Permanent Sample Plots that would determine levels of carbon sequestration in the area. There were no standard questions that you would expect from a formal interview, but rather a focus on the experience I had logging. Part of the duties would be to tally the potential sawlogs and pulp in standing timbre. They showed a high level of interest in not only my experience in log and pulp processing, but my knowledge of the road systems in the area. Turns out they were working in my old logging stomping grounds. You just never know what an employer might love about your past experience. As if the interview could not go any better, Jon pointed out the last paragraph of my cover letter detailing my hobbies and favourite pastimes. I was apprehensive about putting those types of things on a professional application, but an influential professor at Sault College urged me to do so. As it turns out, my musical endeavors as a drummer in local bands resonated with Jon, a former drummer himself. It felt like a slam dunk, and since then I have prided myself on including those types of personal tidbits on my applications.

My time with CLC was by far the best working experience I have ever had. The commute was too far for them to oversee our schedules, and as a group we were tasked with handling all management ourselves. Truck maintenance, day to day planning and completing plots was completely up to us. The first summer working for CLC showed me that hard work and honesty really does pay off. Maybe not that day, maybe not next week, but eventually, the crew members who had proven their worth were rewarded with increased responsibilities and the perks that come with them. After working with CLC for a year or two, I was now taking care of day to day management of the crew and handled any issues that could be dealt internally. The old saying, “no news is good news” seemed to ring true for Nate and Jon in Michigan. 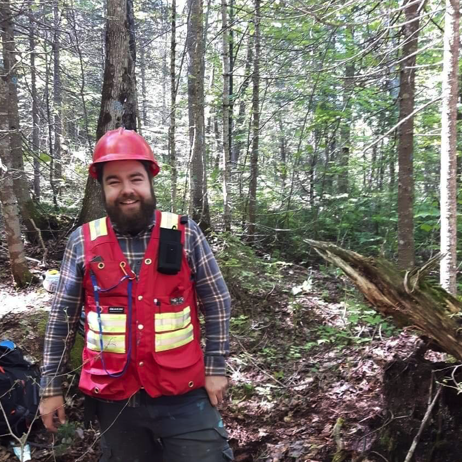 When work wrapped up in the summer of 2019, I was again faced with a decision. Do I want to spend the rest of my career going from contract to contract, or should I go for the next step and achieve my degree? I was ready for something different, and along with my best friends from college, I enrolled in classes at Lakehead University in Thunder Bay, Ontario. 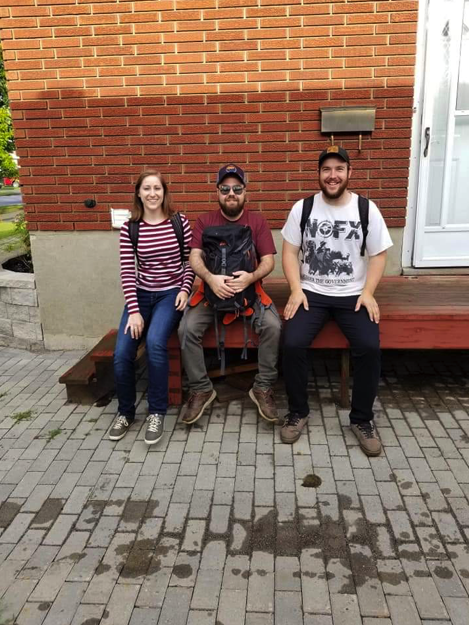 The shift was difficult. I was able to transfer credits from Sault College and hop right into the third year of the Bachelor of Science in Forestry program. There were hard moments, but with the help of my friends and knowing that I was there with a goal in mind, I was able to get through the year. I was happy to learn I had finished the year on the Dean’s List, despite the growing pains of transitioning from work to school after being out of the education system for so many years. I have one more year to complete my degree, and with COVID-19 forcing us to start the fall semester online, it is important to stay focused on the long-term goals I have set for myself.

Something that allowed me to finish off the school year successfully was the offer I received for Weyehaeuser Grande Prairie sometime in October. Knowing I had secured employment alleviated much of the stress I saw in some of my fellow students. I had a few opportunities this summer, but as a returning student with a focus on the future, I took the offer that would help me gain the most work and life experience in my last summer of education. I did not want to settle for a job I had already worked in an area that I was comfortable. In other words, I want to stack my resume while I still can. I believe I have that with my position as a forest Operations Intern with Weyerhaeuser. The difference in practices, road systems, harvesting methods and sights I am experiencing in Alberta are giving me priceless experience that I believe will lead me to even more success in my career moving forward. I am happy to share my experiences with you through the Green Dream Intern blogs and I look forward to a day where I can reflect on my time here with the good people in Grande Prairie.