Unfortunately for the last several weeks, the heavens have decided to turn Edson into a marsh. I have brought up my hiking shoes this time, but I suspect that even they would get extremely soaked and/or destroyed by the crazy weather. My coworker Neil, one of the electricians, did a mock rain dance when the weather was hot and dry – when all of the forest fires were going on. It appears it has worked far too well. He has cursed us all! The driveway going into the mill has this massive pond there now. I was told by my Capital Manager last week that one time the mill flooded and the water was about 4 inches off the ground. I had left some drawings and binders on the bottom of my office in boxes – needless to say, I took 10 minutes during my Sunday to move them to higher ground.

Anyways, I did go back home to Calgary for Canada Day long weekend. Hung out with some friends. We went out hiking at Lady Macdonald mountain near Canmore. It was quite a harsh climb. What made it more harsh was the fact that I had not hiked for about a year, so that compounded the pain. My legs were still sore after about 5 days after. Needless to say that I do squats regularly at the gym now. Going from 0 to 90 in terms of difficulty might not have been the best idea. I checked out some hiking trail websites, and the trail’s rating was: HARD. But I do not regret the hike though. Lady Macdonald was quite a beautiful mountain. At points along the hike, you could see Canmore sprawled out in the valley below. 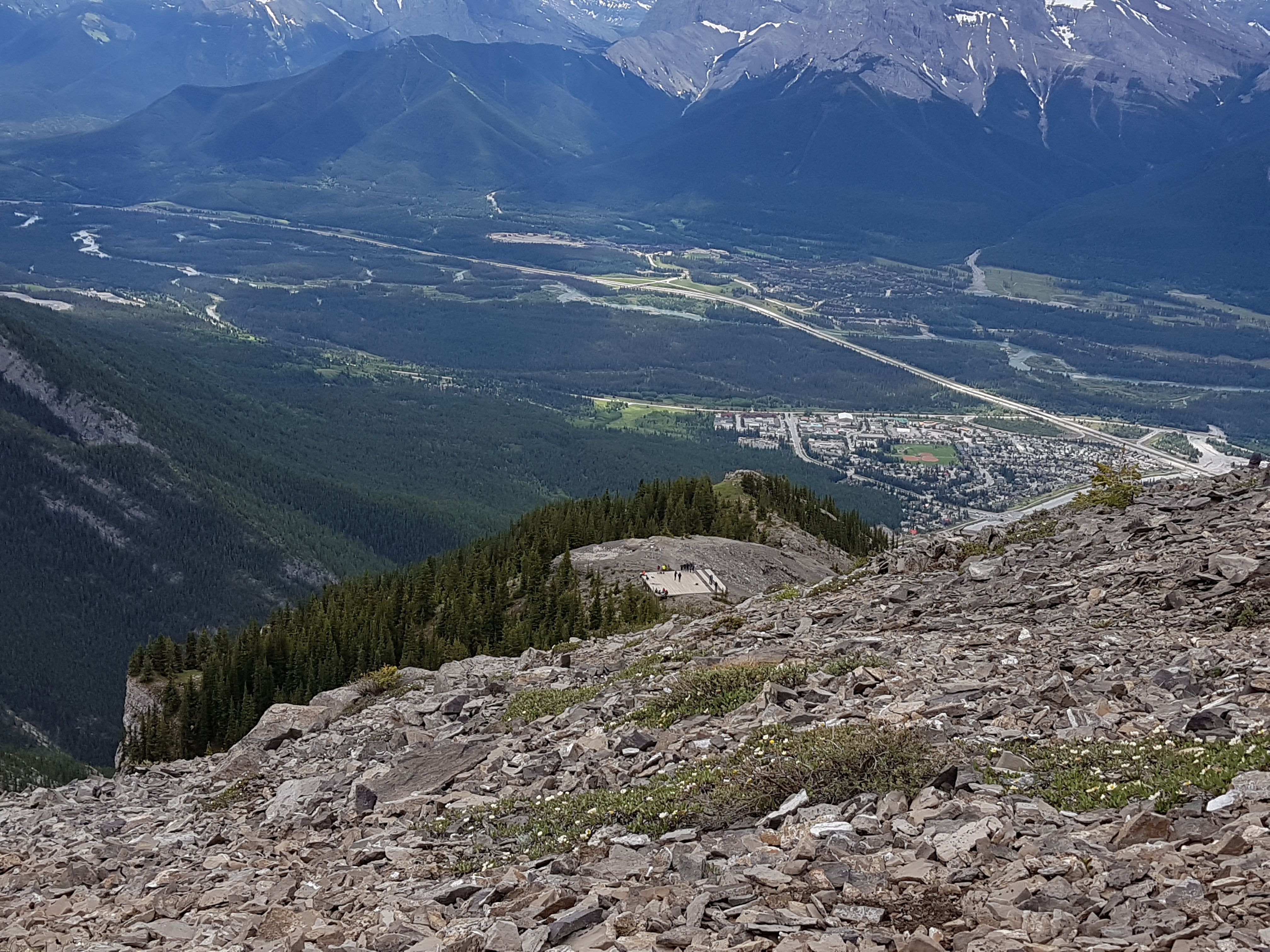 This picture was taken near the top of the mountain. The flora has faded away due to the rocks and cold at the top.

Funnily enough, the trail was called: Lady Macdonald Teahouse Trail. My friends and I were hiking up at the top saying “do you see the teahouse yet?” or “I feel bad for the person who has to start hiking up this mountain to open shop at 6AM.” Tragically, we had been lied to. There was no such teahouse anywhere along the trail. Instead we reached this random wooden deck near the top of the mountain (it was a helipad). 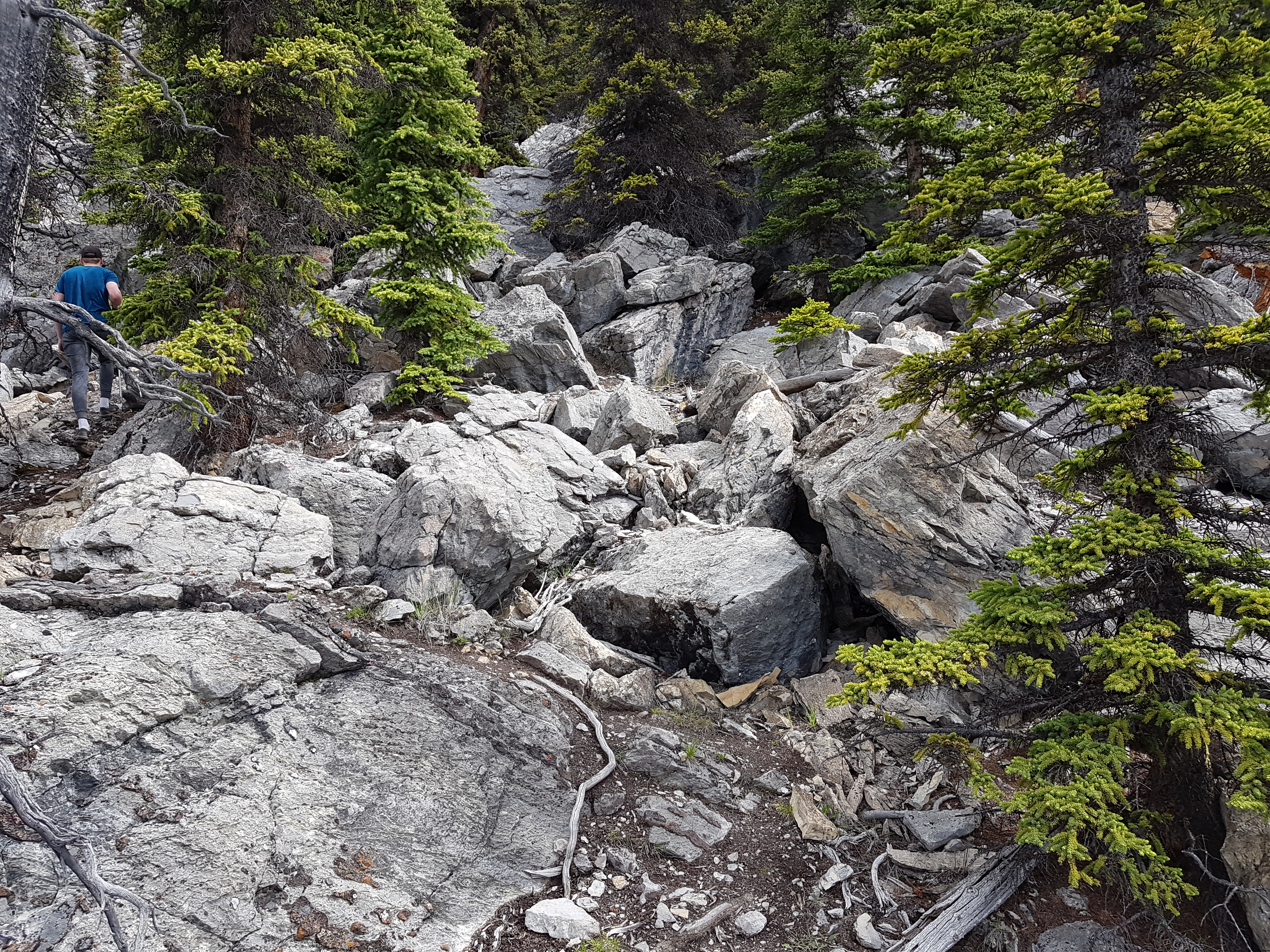 The trail completely disappeared halfway through the hike. We had no idea where to go, so we just started climbing all these massive boulders.

The rocky mountains are all kinds of beautiful. Look down into the valley and you see a cute little toy town. Look up and you see other sharp mountains slicing the sky. And the climate almost turns into a cold, brutal tundra at the top. Trees disappear, then the grass, then you get nothing but flat, knife-like rocks. The wind gets extremely strong. At one point, I reached an edge on the mountain, and the side shielded from the wind had this grass field with flowers. Untouched by humanity almost. The other side was blasted by the wind enough that only rough bushes existed. 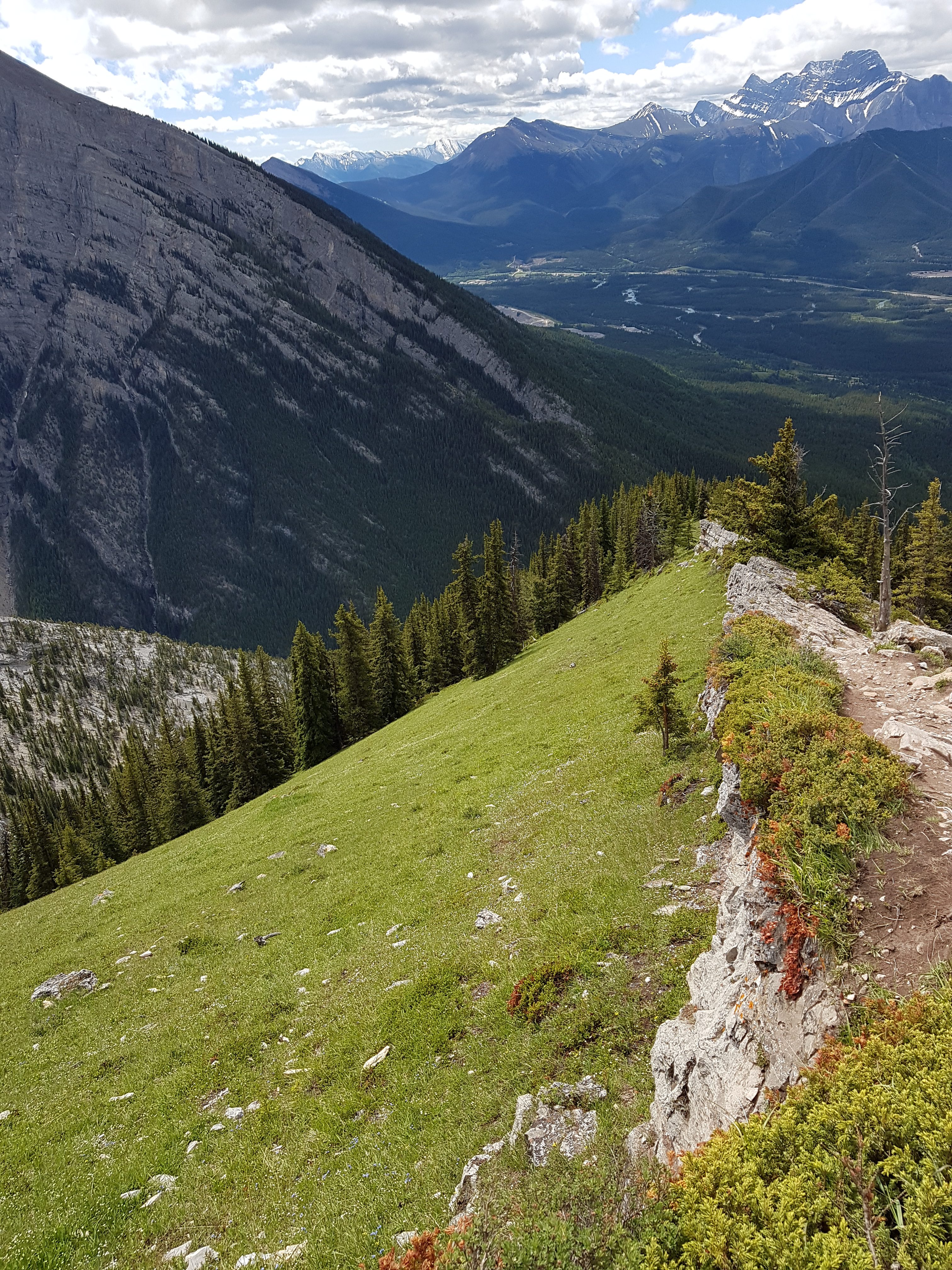 Gorgeous mountain edge. One side rock and death, the other side gorgeous valley with flowers. 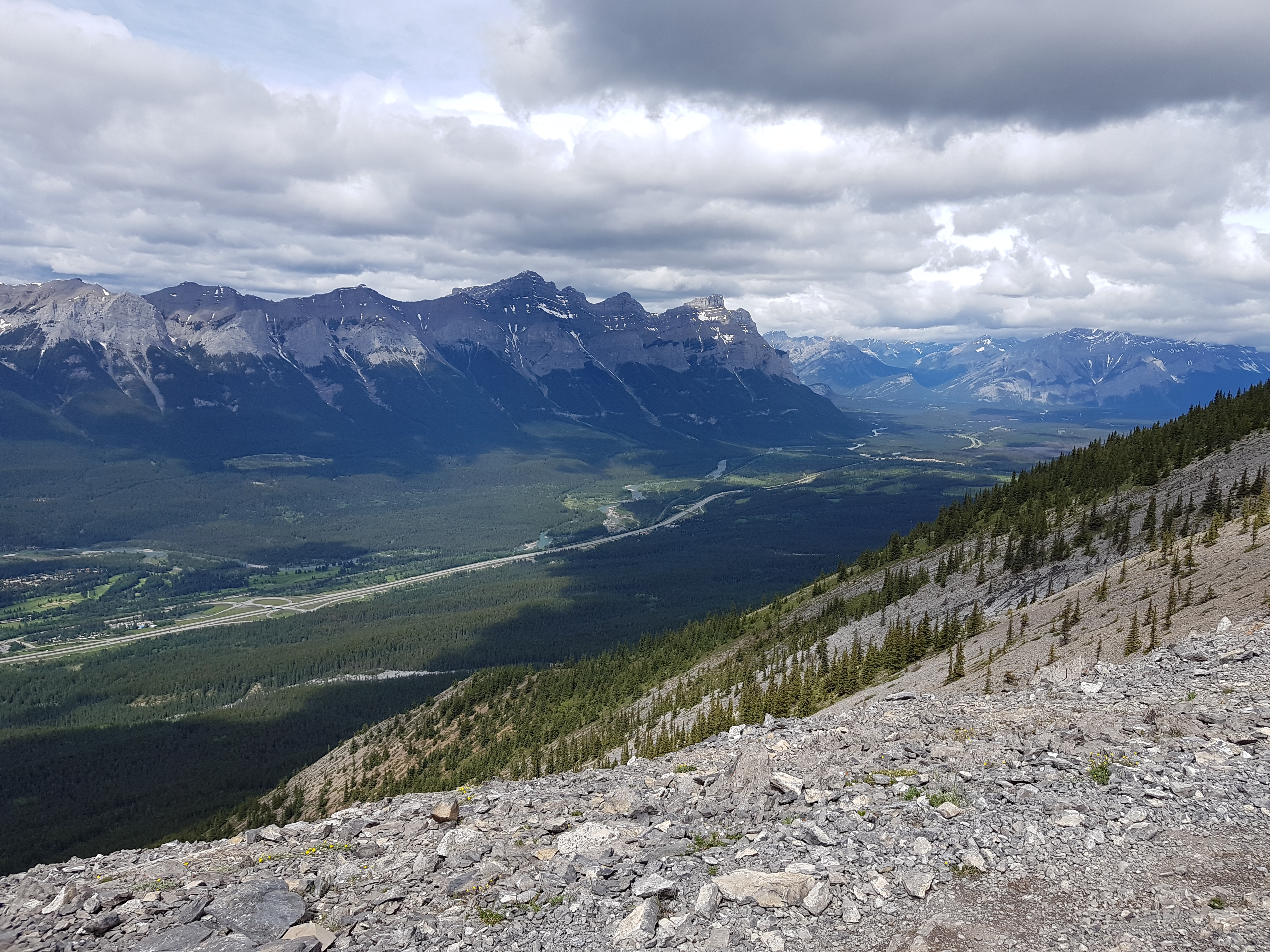 I never made it to the top of the mountain. But I was about 50-100m from the top altitude-wise. I did not have enough experience going down loose rock-gravel to do so. Out of the 5 of us, only 1 had the skill to go up to the top. On the way down, he tripped twice, and squared the rest of us senseless. While we were waiting, the wind had become very strong, so we resorted to laying flat on our backs on the side of the mountain shielded from it. It was quite comfortable, and I nearly took a nap. 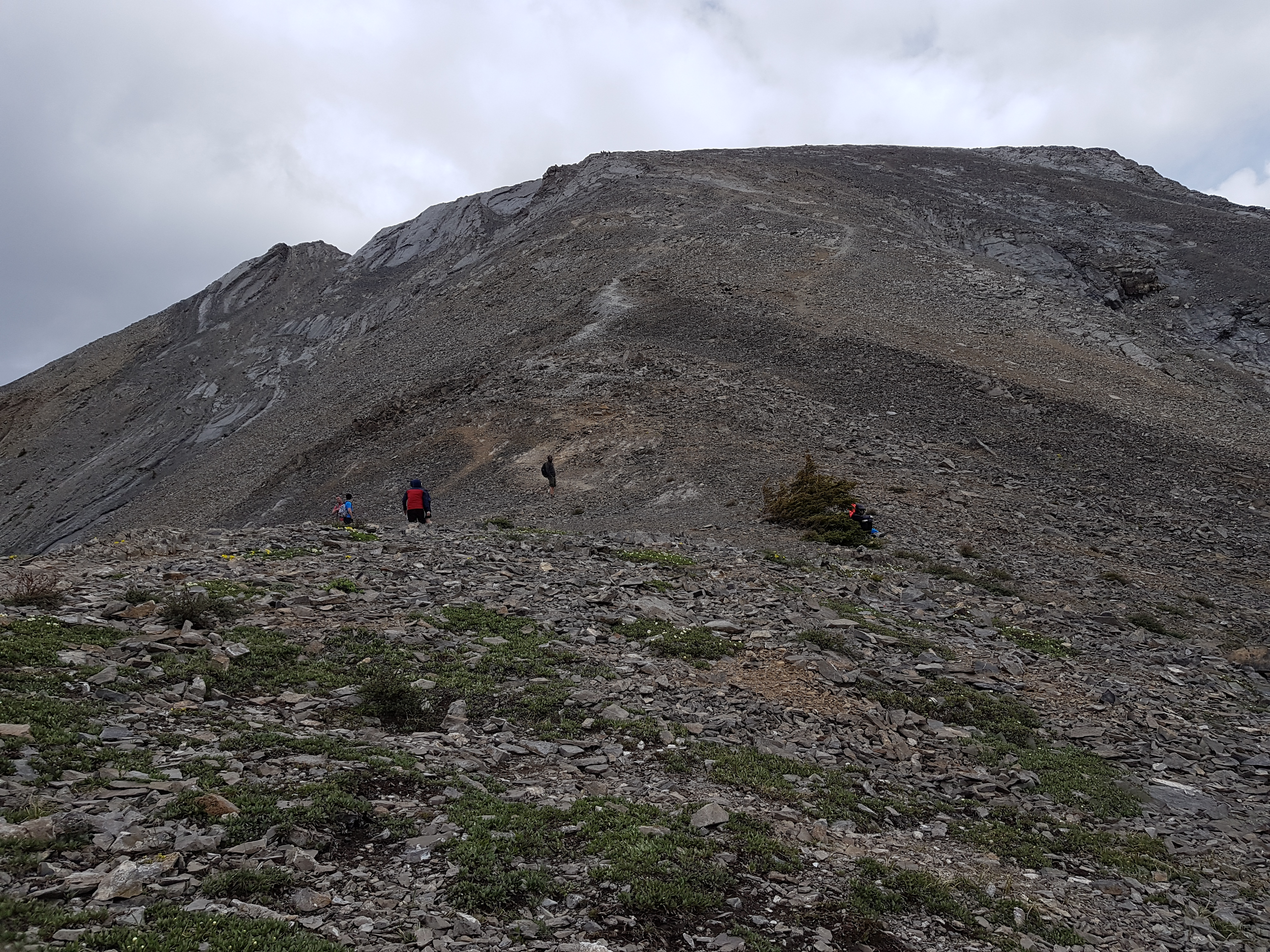 Just up there was the top of mountain. My hands were barely moving enough to take the picture. I had worn only shorts. Much regret.

Going down was quite tiring. It really wears on the knees, and they were quite sore after going down the mountain. Stopping the forward momentum is something to worry about. My friends really liked to run down the trails. But it was a really nice climb. 10/10 no regret. 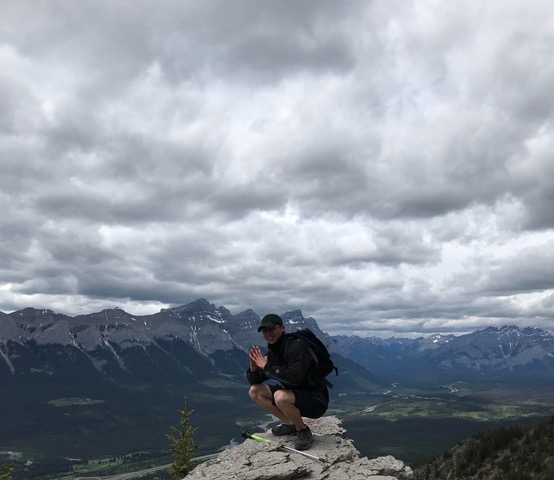 I am a mountain

Of course, the last part of this blog will be about the burners for the Mill’s dryers. They were the original 2 burners from the mill’s constructions. And like many other parts of the mill I call “original,” they are now out of date. Last year, when cleaning, I would pass by those burners often. They were old to the point that really small holes had appeared in some of the walls. Of course, the millwrights that worked with the burners put fire-blankets on them just in case fire would come out. I never saw fire come out of those holes, but you could sometimes see the orange glow. Anyways, the mill has started to replace them. 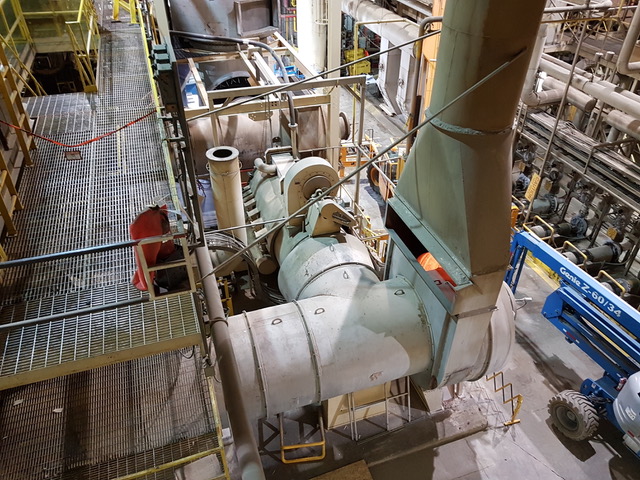 Burner 1. They already took out burner 2.

The burners are in charge of creating heat for the dryers. Prior to being blended with wax and MDI, the strands must be the same general humidity level (dry that is). In order to achieve this, all the strands are put through the dryer, which is a massive spinning drum that is heated. When it comes to wood products, like OSB, consistency in production is what creates a premium product. 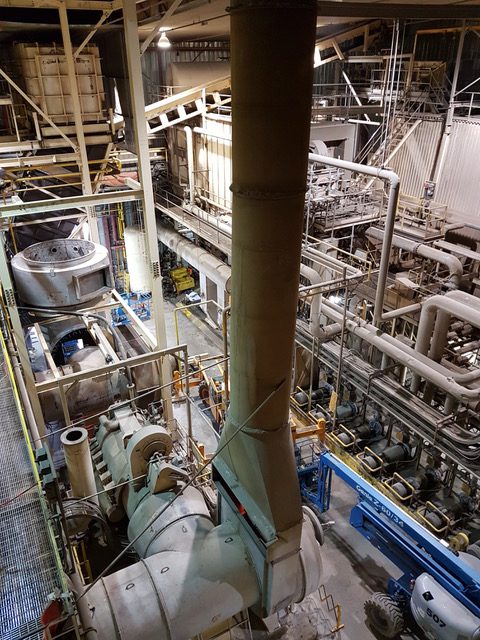 You can see the remnants of burner 2 in the back, along with its replacement being constructed right beside it.

Unfortunately, the old burners were out of standard as well. “Ol’ reliable” is an apt description for their abilities. They weren’t too precise, but they were rugged, did the job well, simple, and fixable. If anything, the fact that the things worked with holes in it is a testament to their ruggedness. But the mill is getting new burners that are more modern and high tech. Again, I feel privileged to have taken these last pictures of them, before they get replaced. Gone are the days at the mill where the millwrights and electricians could restart the old burners by putting on jumper cables and bypassing. There are only some things at the mill are from 1982, and they’re all disappearing one by one. Hopefully I can get them all in my blog. 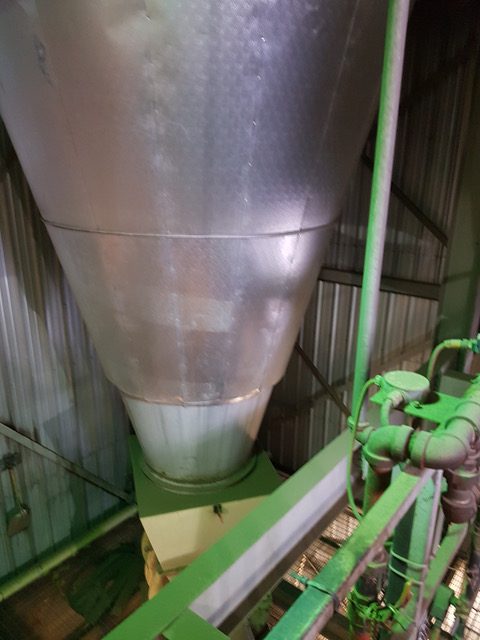 Smaller cyclone separator at the top of the Cylone Tower.

Oh and by the way, for anybody reading who does not know about the filter system for the burners… no, the big tubes going out the top do not just release noxious fumes out the roof. They actually get sent to the cyclone separator and EFB towers. The gases get filtered through both of these systems before the cleaned carbon-dioxide gets released from the mill. The stereotype in the city is that all these mills and oil facilities release death and destruction into the skies. A good quarter of the entire mill is dedicated to cleaning the air before it gets released. Industry standards have improved monumentally both safety-wise for operators to environmentally. Every substance that enters and exits the mill is carefully monitored. All of the wood that is entered the mill is used either as fibre for the OSB, or fuel for the burners. 100% efficiency. 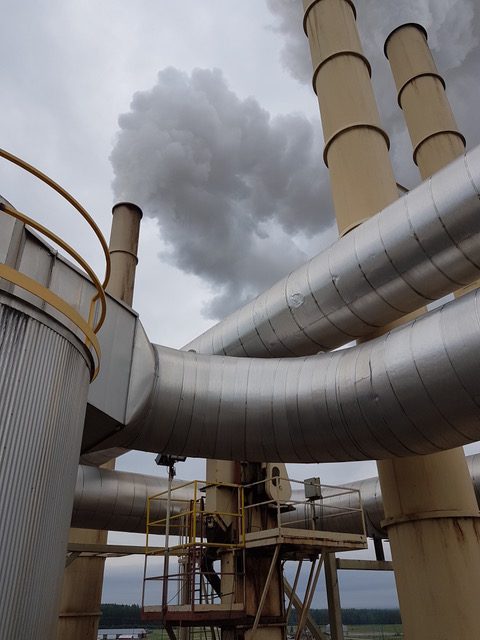 The aluminum tubes come straight from the burners into the Cyclone Tower. The brown ones release filtered air.

There is a program for the ashes to get sent to farmers for use as fertilizer at Edson OSB. It is called the Aspens to Ashes program, and truly defines the mill’s devotion to sustainability. During the process, bark is stripped off of the wood, then fed into the burners as fuel. Not even the ashes are wasted. They used to get sent to the landfill. Alberta soil pH can be quite low – our soil is acidic. Putting ash into our soil can raise the pH up so that we can grow crops more efficiently. Alfalfa is one of those species. The ash has CaCO3 in it, which is basic, and will counteract the acidity. And that’s not even where the program ends. In order to ensure zero harm, we regularly monitor the soil over longer periods of time. We make sure the ash we give to farmers does not damage the land and soil.

I think that’s poetic. Industry is always modernizing. Many kids my age have this image of severe pollution from the oil and wood products industries. This is evidenced by the term “tar-sands” that they use rather than “bitumen”, or the numerous videos of student protests getting in the way of logging trucks (to my extreme irritation). I would just like to get this message out there. Safety standards have always been improving. Industrial and emission standards have always been improving. There’s a reason the symbol of Weyerhaeuser of a single tree. It is what sustains our communities. Without the single tree, there cannot be a forest, and there cannot be our industry. We have an entire department (Timberlands) that maintains the forests we either own in the States, or manage in Canada. We make sure the forests grow back.

“This is not for us, nor for our children, but for our grandchildren.” – Frederick Weyerhaeuser