With the summer quickly coming to an end (less than a month and I will be back in the classroom), I’ve decided that it’s time to do a blog looking back at some of the wildlife that I’ve been fortunate enough to observe this summer. Anyone who lives in small town or rural Alberta surely gets to see some wild animals. In fact, deer, bears, moose, coyotes, and beavers may be spotted right in town or crossing the river. But spending so much time on the road and outdoors, has provided great opportunities to observe some of my province’s more rare creatures.

So many of the individuals that I’ve been able to work with this summer are very knowledgeable and quick to notice wildlife, so that has helped me to learn and see so much more than I would have otherwise. I’m beginning to become aware of how important this knowledge is because in forestry, you are working in very close quarters with everything and everyone you share the land with. Bears, birds, ungulates… they are all a part of the forest and they are all considered when managing a forested area.

I almost always have a camera on me, so I have been lucky enough to capture pictures of some gorgeous animals, though there were some interesting sightings that I was not able to photograph. For example, the gorgeous fisher that ran across the road ahead of the truck (the only fisher I’ve ever seen), the ground hog that was hiding in a pile of logs at Leddy Lake campground, the cow moose with twin calves I saw walking through a marsh, as well as my very first elk sighting.

Some of the animals which I was fortunate enough to photograph include black bears, many types of birds (hawks, woodpeckers, cranes…), rodents, a cow/calf moose pair, and many deer.

FUN FACT: One animal that I will not be spotting anytime soon: rats. Alberta is actually “rat-free” and it is actually even illegal to keep them as pets within the province. However, there are many other rodents and small mammals including weasels, squirrels, rabbits and martens.

Some of Alberta’s most amazing wildlife, which I am still waiting to be lucky enough to spot in the wild (hopefully not too close and personal) include Canadian lynx, mountain lions, grizzly bears, wild bison, as well as many of Alberta’s hundreds of bird species. I have to admit, I think that I’m turning into a bird lover. Birds, whether they be raptors, waterfowl, or songbirds, are some of the most beautiful and most rewarding to photograph. Each time I get a picture of a bird, I come back to the computer to look it up and learn all about it. Recently, after a long photo session with a red-tailed hawk, I learned that to tell the difference between a hawk and a falcon from a distance, you can look for the finger-tip like feathers on the end of a hawks’ wings.

Much of Alberta is covered with lush forests and wetlands, and the province houses a great diversity in species as we move from northern to southern parts of the province. Despite this, many species are currently endangered or in some way at risk. Examples include: the swift fox, wood bison, lake sturgeon, whooping crane, and the northern leopard frog (this information as well as further details on at risk species can be found at: https://extranet.gov.ab.ca/env/wild-species-status/default.aspx).

It is alarming to think that in addition to these species, many other animal populations are at risk, sensitive, or potentially at risk, so much information is still missing to properly assess and protect Alberta’s wild species.

As a conservation biology major, I get a little bit more excited about wildlife than the average bear… But anyone can appreciate the great diversity and beauty in Alberta’s wild creatures. I hope that no matter what your interests may be, that you enjoy some of the pictures I’ve attached. Please forgive the amateurism and bias towards birds in my photography!

Thanks so much for reading, I had been looking forward to writing this particular blog all summer. 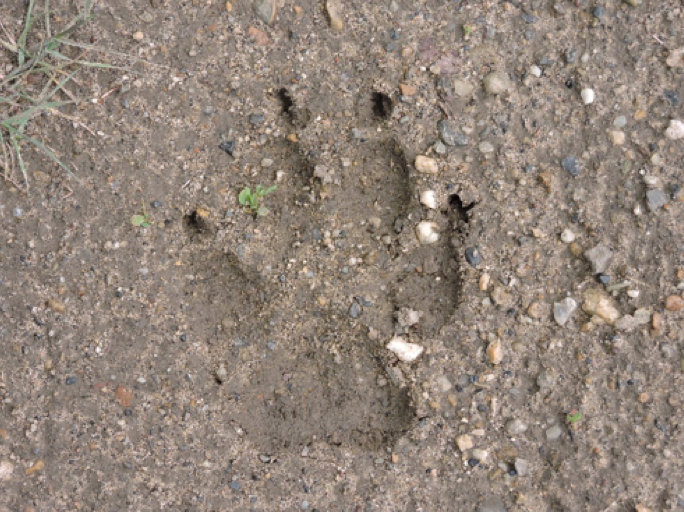 Figure 1 A wolf (Canis lupis) track, and not a small one at that. Wolf and other tracks can often be found on soft, damp gravel roads 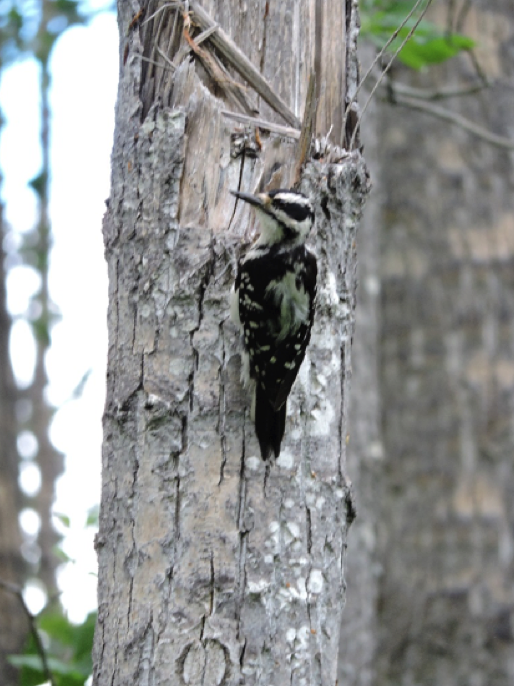 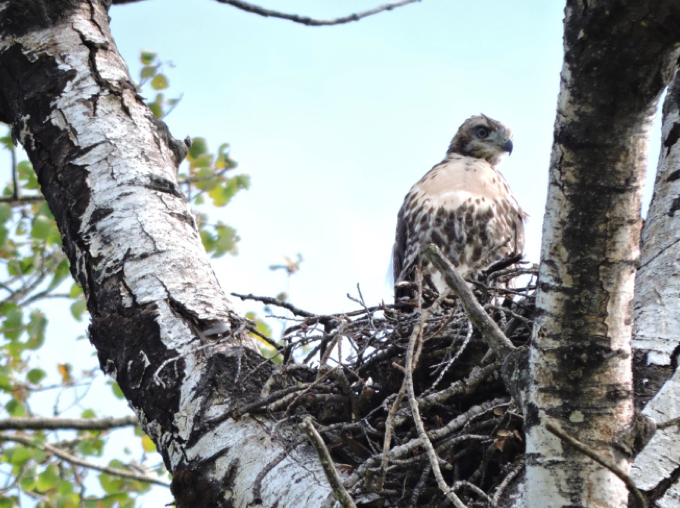 Figure 3 One of two young hawks in a nest I spotted. There are many hawks to be seen this summer in the Peace Region 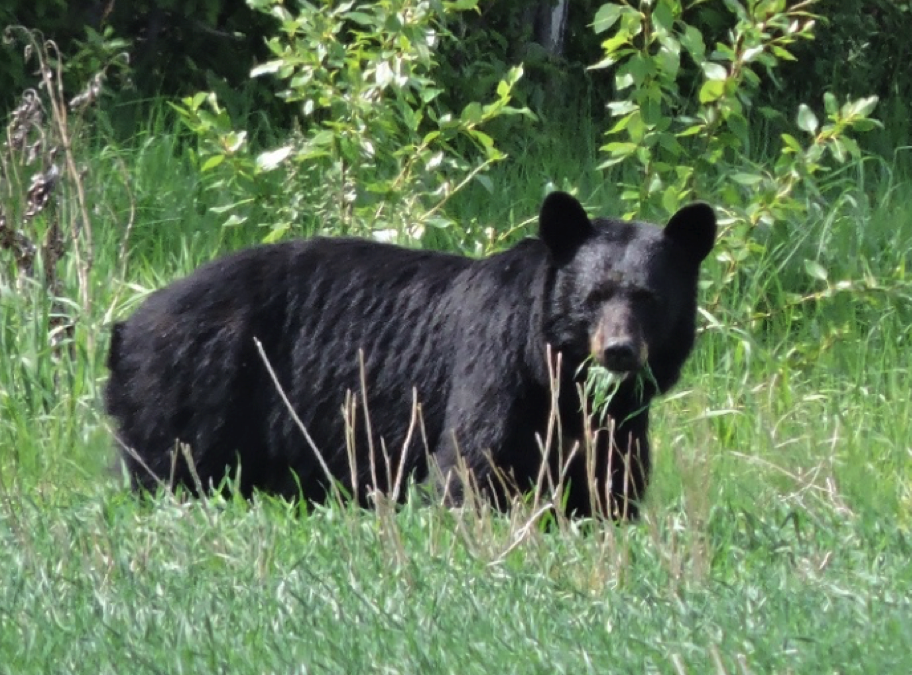 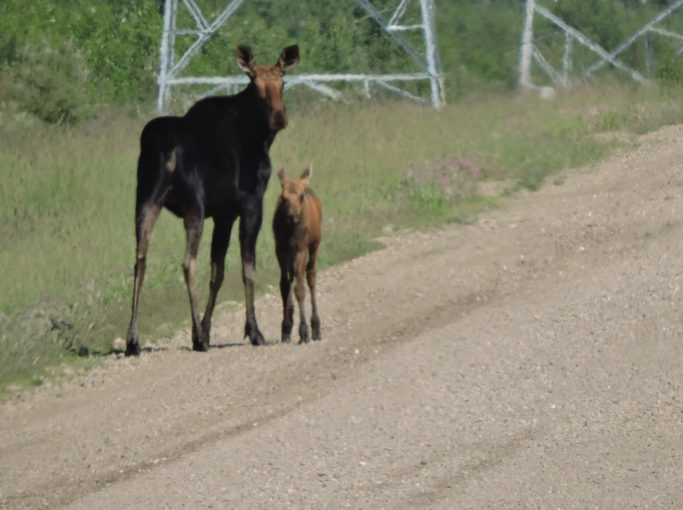 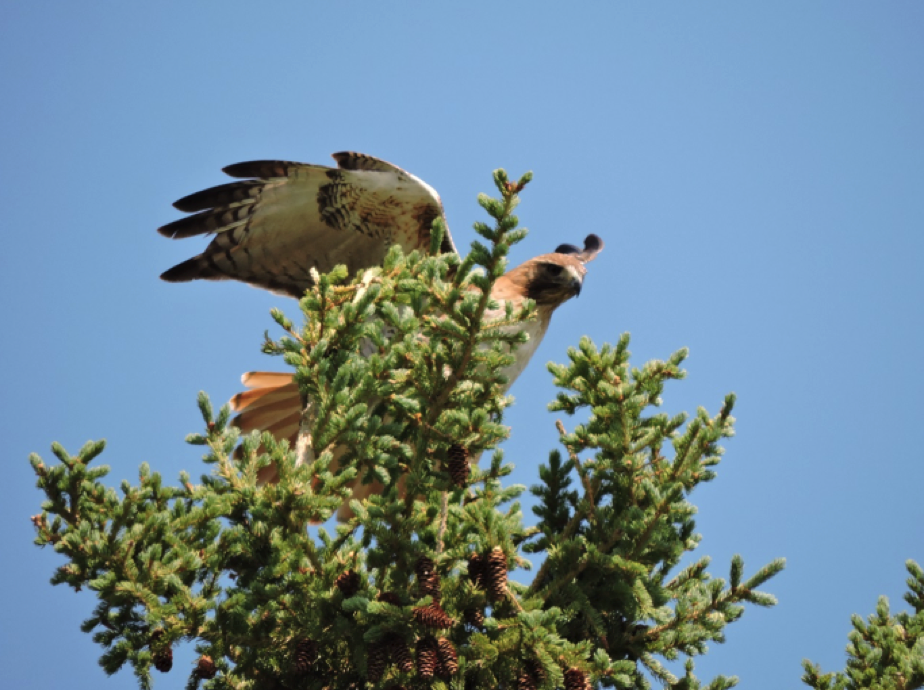 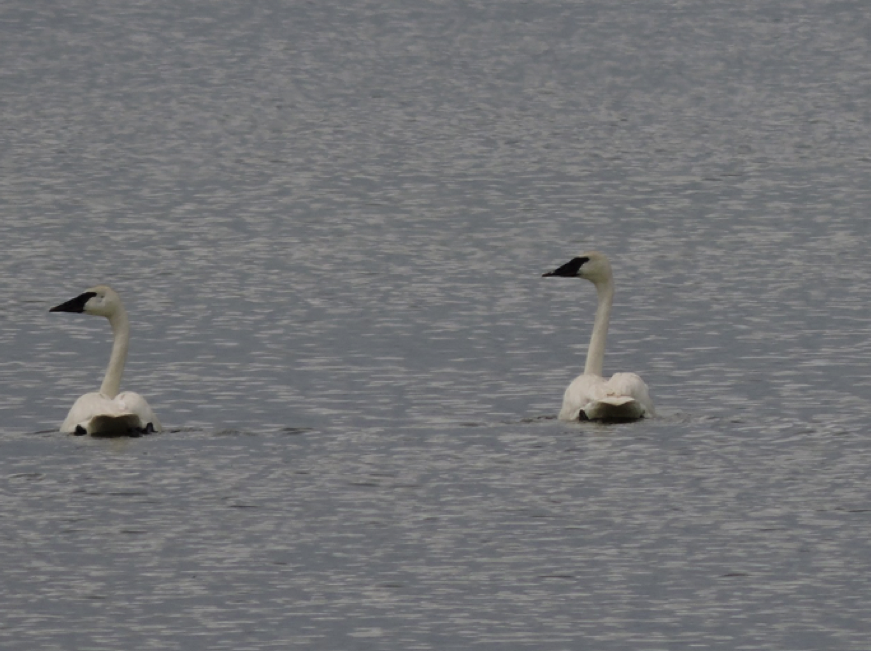 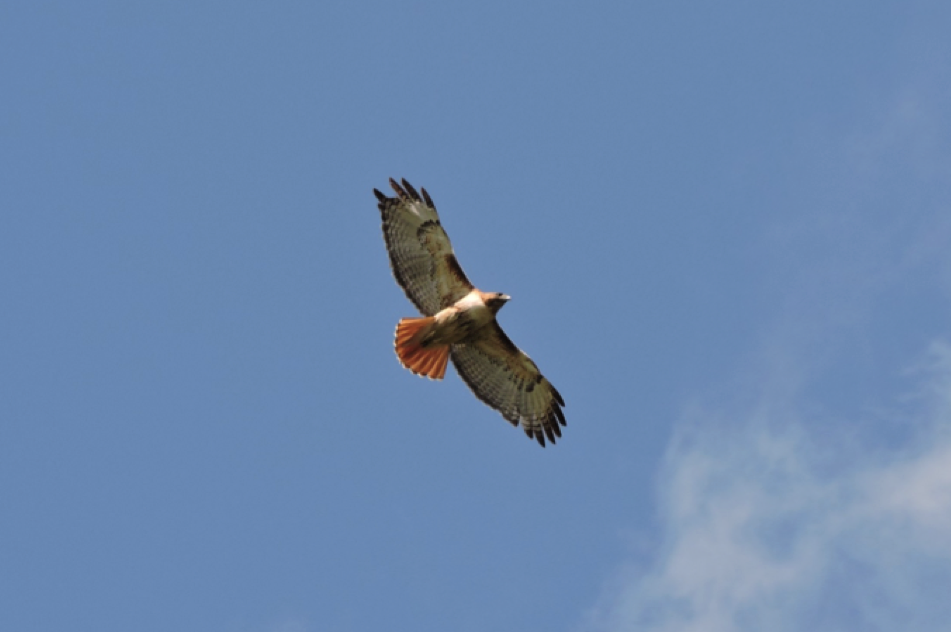 Figure 8 A red-tailed hawk on a warm day 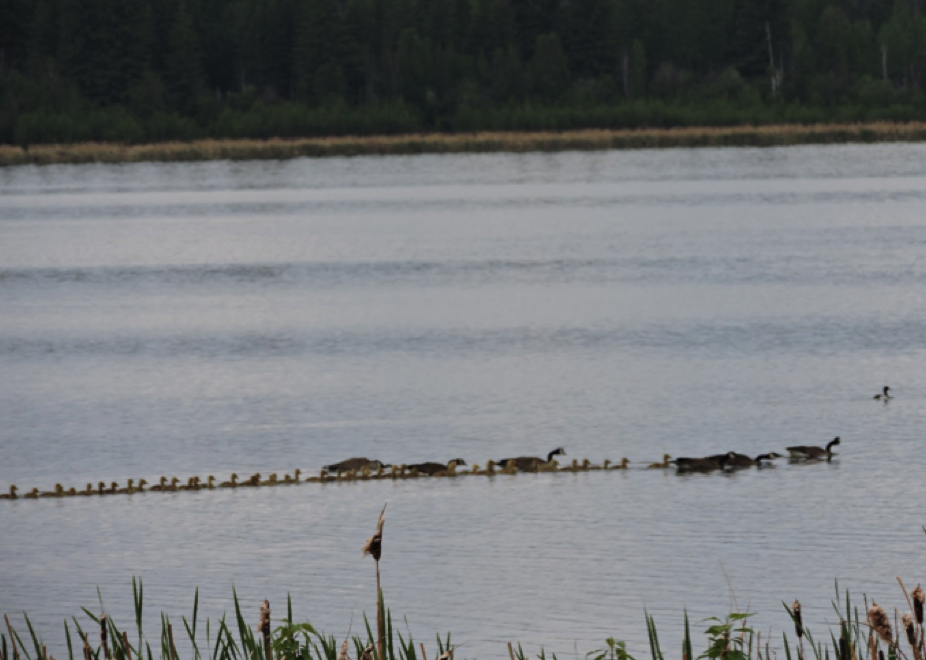 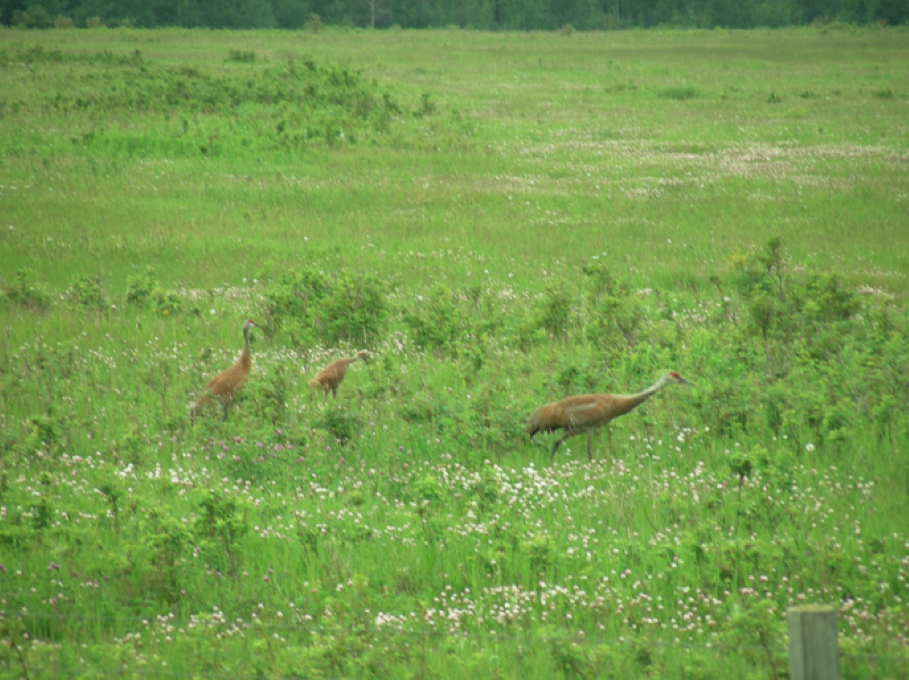 Figure 10 This picture may be blurry and overwhelmingly green, but if you look closely you will spot a family of Sandhill cranes (Grus canadensis). When startled by me, they did not leave their land bound colt, but rather stayed to protect and hide it 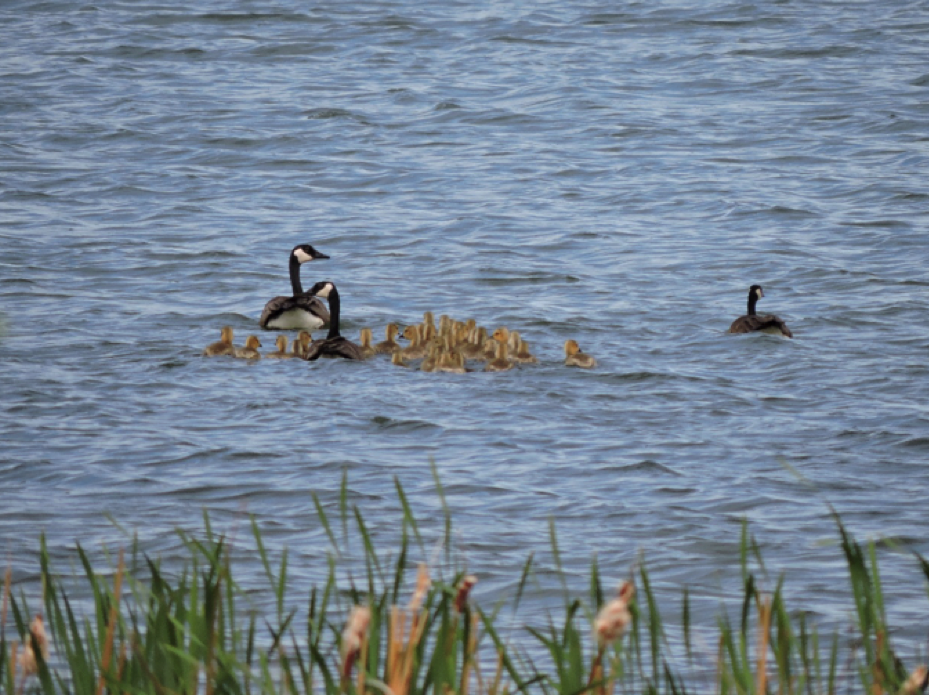 Figure 11 I count at least twenty! 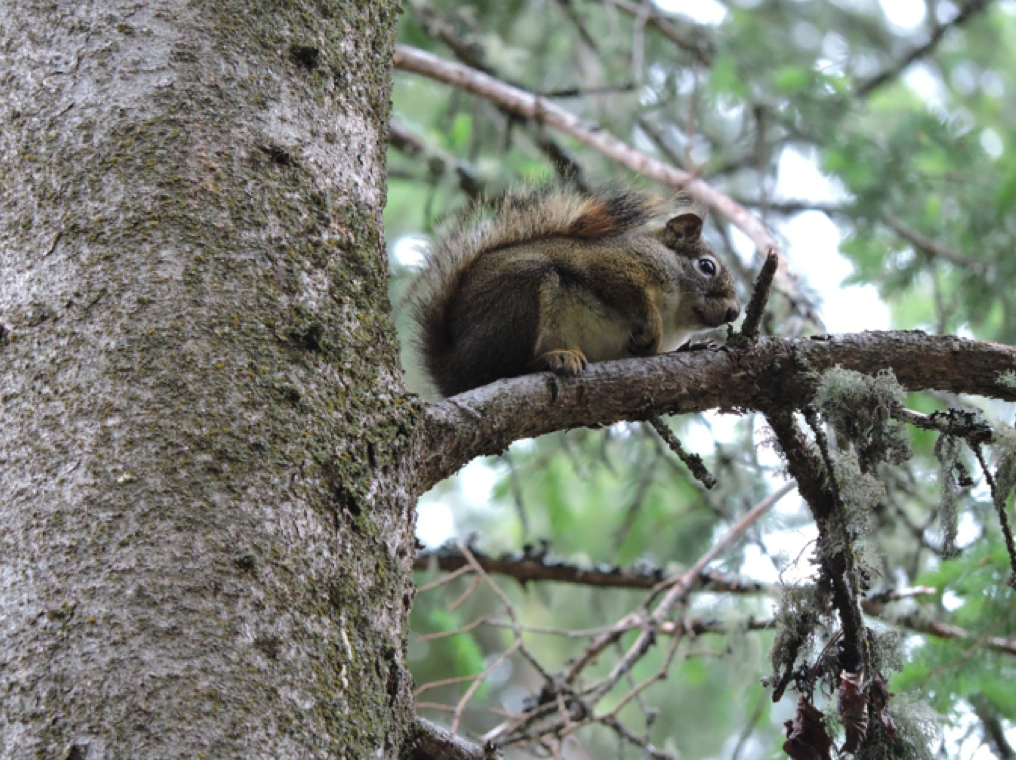 Figure 12 This squirrel was present several times for our Leddy Lake Interpretive Trail tour, this is the resident of the midden which we stop to learn about with the students